My eldest son has been waiting, patiently, for his first tooth to fall out. Quite a few of his friends are onto their third and fourth teeth popping out; one has lost about eight teeth and is keeping the Tooth Fairy very busy.

We visited the dentist earlier this year and she mentioned it was ever so slightly loose and maybe by the time we saw her in six months it would be out. He’s held onto that hope! Last week he started to complain his tooth was sore and was getting ‘wobblier’. I went along with it, not believing it could be that wobbly. Today, I saw it wobble – a lot. And I feel a bit emotional about it.

There’s a perception that babies look ‘older’ when they get their first tooth. It’s as if they’ve shifted from newborn to the next stage. When kids loose a tooth they also look older and move to the next stage of childhood – and maybe I’m not ready for him to get older.

I know he’s excited about his wobbly even if he’s not jumping up and down and doing cartwheels (not that type of child). And I know this because he’s asked me to pop a little bag into his school bag in case it falls out during school (doesn’t want to risk losing it); he’s recommended I feed him soft food for the next few days (had to smile at that one but he’s not going to be living off ice-cream and yogurt); he’s asked if he needs to brush his teeth given his loose tooth (yes is the answer because the Tooth Fairy doesn’t want a dirty tooth). To an adult these can seem a little dramatic. To a child these are important considerations for a loose tooth – and I’m happy to oblige.

UPDATE: I began writing this post on 1 June –last night the tooth came out! We were sitting here watching TV when he began playing with it, and all of a sudden there it was in his hand. I think we were all in shock for a little bit; for me it was more that it came out so quickly. He went to bed very excited in the hope that the Tooth Fairy would come. And he wasn’t disappointed. There was a lovely note along with some money (the important part!) and while the gap in his mouth feels a little odd for him, I’m happy to report that he doesn’t look that much older with the gap. 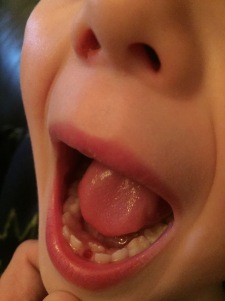